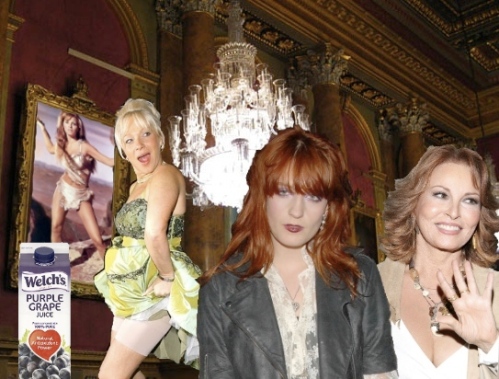 It’s mum Denise who flings open the doors of the grandiose Welch Mansion with a cheeky flourish. “I suppose you’ve come about our Flo!” she bellows cheerfully. A familiar face from TV’s Loose Women, Dancing On Ice, Coronation Street and whatever else it was that she was in, Denise wears her fame lightly, like a coat of primer.

As I get seated in the main hall, I notice Florence Welch (thankfully without ‘And The Machine’, her backing band!) sitting nervously by a French window, sipping some elderflower cordial. “I’m making cottage pie!” shouts Denise from the kitchen door, waving a mince-encrusted slotted spoon. Florence looks up with a blush.

It’s clear that cross-generational fame hasn’t dented the charm of these lovely ladies, for moments later, grandma Raquel slinks fragrantly in. “Where have you been?” asks Florence timidly. “We’ve got an interview!”

“I’ve been in my cave,” confides Raquel huskily. As I was to find out, she’s referring to a full size polystyrene cave she keeps upstairs, in which she enjoys reliving her ‘glory days’.

But it’s the remarkable contemporary success of these three women that interests me. Their grape juice empire has conquered the ‘Pentecostal communion’ market, and the purple variety is now the second most likely drink to be offered to a recovering alcoholic at a suburban dinner party.

“I had the idea back when we were filming Fantastic Voyage,” says Raquel slowly, that accent of hers very thick. “I looked out at that giant arteriovenous fistula we were dodging in our miraculous little submarine, and I thought ‘Grapes could change everything!'”

“He doesn’t want to hear about all that, Ma!” admonishes Denise through a mouthful of mash. “Tell him about the Grammies, Flo!”

Florence puts down the chrysanthemum leaf she’s nibbling on and daintily relates to me her pride at standing next to Jennifer Hudson and Christina Aguilera at the recent star-studded event in Los Angeles. “The NME keeps trying to make me out to be a credible rock chick,” she confesses credibly. “But my heart is in pop.”

“She gets that from me!” interjects Denise loudly, accidentally spraying me with tiny pieces of half-chewed diced carrot in her excitement. “Everyone remembers my chart battle with East 17 over Halloween ’95, don’t they! And that Thunder of theirs only got to number 4!”

She’s so enthusiastic it would seem unkind to remind her of the facts: her attempt to follow the success of her Soldier Soldier co-stars Robson & Jerome, with a Dusty Springfield cover, stalled at number 23.

“Our Justin was musical too,” says Denise, her eyes misty with nostalgia. “But I was so young when I had him.” She spears a forkful of cabbage angrily.