It’s a Spotify playlist! With a bonus YouTube link for a big favourite that wasn’t on Spotify. These are the tunes that have kept me going all year…

Will Muse’s rock career be alright after billions of people around the world have heard their official 2012 Olympics song Survival? I mean, it’s awful, isn’t it. It’s ridiculous. (Yes, it’s both those things but I love it.) Here are some TV pitch ideas for the lads in case they have to step back from music after this.

The concept: Horrific documentary in which the boys investigate body parts left behind by serial killers. 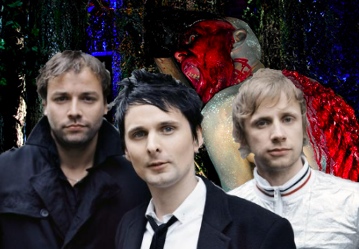 Dom: That’s a nice peroneus longus you’ve got there Chris.

Chris: Yes it’s in very good condition isn’t it. Shame they couldn’t salvage the mucous sheath after this poor fella got flayed.

The concept: Ill-considered revival of the mediocre Michelle Collins vehicle. Nicki and the gang are back from the Med and working on the pier in Muse’s home town of Teignmouth. Matt and the boys play amusement arcade attendants who get into all sort of hilarious scrapes. 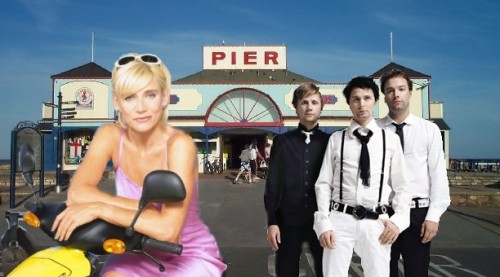 Chris: If we don’t find that bag of 5p coins before Brian Conley gets here Nicki’ll have our guts for garters!

Michelle Collins: I heard that! Go and clean out the Penny Falls machine with a toothbrush.

Chris: (muttering) At least no-one’d ever make a shitty tv show out of Penny Falls.

The concept: The boys get their own shopping channel segment selling electric baby substitutes to the lonely and/or barren.

Matt: And THIS one will crucify your enemies!

Matt: (flipping baby roughly over) Aha! I’ve exposed your lies, baby! The underneath is no big surprise! Now it’s time for changing! And cleansing everything!

Time Is Running Out

The concept: Sapphire and Steel spin-off in which the boys chase the physical embodiment of Time through a building and try to stop it “running out”.

Chris: We tried that Matt. It regressed us all to toddlers and made us dig it up again.

Matt: Murder it then. Why don’t we murder it? Or smother it! Or–

Dom: I wish we could take time back to before the Olympics.

The concept: Science exploration show in which the boys join forces with Professor Brian Cox for some fun with astrophysics.

Dom: You got that off Wikipedia.

Professor Brian Cox: Hey you do all realise this song sounds exactly like Do Something by Britney Spears, don’t you.

If popstars were… the apocalypse

So many ways for the world to end. It’s almost impossible to choose the best one. But some of our most interesting popstars have had a stab, and Britney’s only the most recent…

I’m scared, hold me! Where better to start our end times tour than with Jonathan King? Sure, this song’s been covered by everyone from Nina Simone to the Flaming Lips, but the desolate lyrics have a special resonance coming out of the wonky mouth of their author, the future convicted sex offender and satirically self-proclaimed ‘Vile Pervert’.

What sort of apocalypse is this? It’s a very 60s sort of Armageddon, with overtones of an ecological crisis but a sense that the worst thing that could happen would be everyone not loving each other any more and just going away. Jonathan wanders the streets of an abandoned earth, rambling oddly about mouths full of chocolate covered cream and arms that can only lift a spoon. No I’m not sure what it means either. Perhaps there are clues in his later work.

Does it sound like the end of all things? Yes it sounds terrible.

Black Box Recorder – It’s Only The End of the World 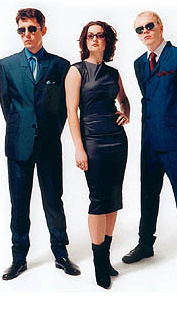 I’m scared, hold me! Well yes I have skipped straight to the late 90s without including Pet Shop Boys’ End of the World. It’s beautiful and devastating but it’s about the world NOT ending. Think of Black Box Recorder’s song as a bleaker response along similar lines if you like.

What sort of apocalypse is this? I’d say it’s the natural destruction of the earth as a consequence of the sun’s expansion – seen in an especially soporific, bored way, of course. The earth’s rotation slows, satellites break up in the atmosphere and our ashes are scattered in space. Meanwhile the narrator’s thoughts turn to the tatty fairground rides at a departed circus, and the dissipation of love. 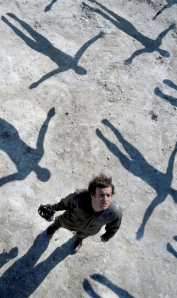 I’m scared, hold me! It’s no surprise to find these fellas on the list. They’re Britain’s favourite doomsday combo, after all. “It’s time for something biblical!” declares Matt Bellamy with glee as thunderous piano chords and DRUMS OF DEATH smash all around him.

What sort of apocalypse is this? You only need to look at the album cover: it’s the Christian Rapture, and some poor fella’s got stuck on earth. Speaking of which, I discovered today that there’s — oh yes — a video game version of Left Behind, that histrionic series of post-Rapture potboilers that’s popular in Christian bookshops. “If you can’t convert them, you might have to kill them!” players will tell themselves as they struggle to bring God’s love to a world awaiting Tribulation. Amusingly for uptight evangelicals everywhere, you can also play as the Antichrist’s forces.

Does it sound like the end of all things? Yes it bloody does.

U2 – Last Night On Earth

I’m scared, hold me! You can’t blame U2, with their roots in a charismatic Dublin fellowship, for being a bit obsessed with the end times. They’d even already had a dry run with Until the End of the World, a few years before this one.

So, apparently they had to put this song together in a terrible rush on their last studio day before going on tour. Poor Bono had to stay up all night to finish the lyrics! It doesn’t show, Bono. My favourite bit is “She’s not waiting on a saviour to come, she’s at a bus-stop with the News of the World and the Sun.” Given a choice of how to spend the last few hours of existence, I wouldn’t bother with the tabloids I don’t think. Especially not when, as logic tells us, one of them is at least a day out of date, whichever day of the week it is.

What sort of apocalypse is this? Hands on the clock are sticking and slipping (temporal distortion?), the ground’s giving way, and the girl in the song has got to ‘give it away’. It’s all a bit vague (THAT’S NOT LIKE YOU BONO), and Dublin was a long time ago, so let’s plump for something nice and Buddhist involving an advanced perception of time and the cycle of destruction and recreation.

Britney Spears – Till The World Ends

I’m scared, hold me! Well it was only a matter of time before Britney turned her attention from self-destruction to the destruction of all things. Her sugar-coated catastrophe takes the form of a doom-laden dance-off. It’s that unique feeling when you find a partner on the dancefloor who’s so good you want to grind to the beat until the flesh melts off your bones.

What sort of apocalypse is this? Britney’s assertion that the world’s end will be within her lifetime rules out the dispensational premillennialism you might expect from her Southern Baptist upbringing. I’d tag her as a progressive amillennialist, or even a partial preterist, although with her determined adherence to hedonism in this song, it’s possible she doesn’t see herself as one of the saved.

Does it sound like the end of all things? No-one expected a disco! But there’s that thrilling moment when the end of the world is depicted sonically by a decaying 8-bit crunch. And then it comes back! Of course, if you watch the video, Britney does appear to have actually averted the apocalypse by dancing. The sun shines out of her arse at 3:10 and all! And as it’s set on “December 21, 2012”, she seems to have lumped herself in with the Mayan calendar view of things, so I might just have to rethink my interpretation of her eschatological leanings. But I’ll let Wikipedia have the last word. They’ve got a very important, and amazing, distinction to make.