Tied up with string: March

I suddenly realised, when there was no new episode of Friday Night Dinner on Comic Relief night, that it had become my tv highlight of the week. And quite right too; it’s very funny with a gently surreal tinge that anyone from a family of eccentric weirdos will recognise as THE TRUTH straight away.

Oh god The Weeknd’s House of Balloons has absolutely killed me. It picks up ultra-slow, claustrophobic R&B from where Drake left it last year, but it’s bleaker and harder and sadder. Desire and despair and devastation. I love it. AND IT IS FREE.

Britney’s Femme Fatale is pretty much flawless too – just the right mix of phoned-in robo-vocals, off-kilter production and the occasional nod to the rest of what’s going on in the charts. And good songs, more importantly. Excellent.

Wake Wood made me very happy indeed.  Hammer are back! And it’s like they’ve never been away, what with a couple moving to a new home, trouble with the car on country lanes, creepy children, implacably menacing animals…   In particular this film could be twinned with the Hammer House of Horror episode Growing Pains: HE works with animals, THEY’ve lost a child, SHE suspects supernatural goings-on, THAT PET DOG should probably have an eye kept on it etc, etc. Really thrilling and topped off with some lovely evocative music. WATCH OUT FOR THE SCARY ABACUS.

I’m sticking my neck out for Anuvahood too, especially after seeing a slew of reviews looking down on it for being crude and juvenile. There’s nothing wrong with crude and juvenile! I get the impression half the reviewers are just upset that they didn’t understand most of the slang. We laughed all the way through, especially when the magnificent Jocelyn Jee Essien charged in and took the film over for the duration of her cameo.

The Six Million Dollar Man homage in Tinie Tempah’s Wonderman is perfect, and nicely tongue-in-cheek (It’s not an especially new song, but the video’s been doing the rounds in the last month). Let’s think of my posting it here as a public service – I suspect I have a number of readers who love a bit of cheesy 70s telefantasy but don’t often hang around the pop video channels. This is for you!

ANIMAL OF THE MONTH: 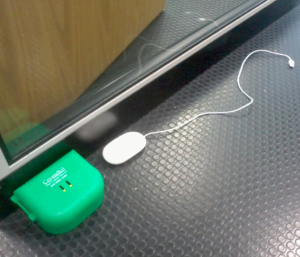 We’re over-run with mice at work at the moment. Droppings have been found in drawers, unattended food left nibbled through, and on one notable if implausible occasion, mouse-wee was detected on someone’s desk. A succession of hard-faced pest removal men have stomped through the office, but more often than not they come to shake out the traps into their mousebuckets only to find them empty. While cheese and wine parties continue squeakily in the skirting boards, I hope.