“Windows gives me the family nature never could”

This advert, in which an everyday mum grows frustrated with her rubbish family photos and uses Windows to “swap in some smiles” might have passed me by if not for that chilling catchphrase. At most I might perhaps have made a playful comparison with the surgical head-swapping antics in HG Wells’ The Island Of Doctor Moreau. But “Windows gives me the family nature never could”? It raises the most horrible of spectres and we must plunge into darker waters.

Let’s not suggest, though, that using Windows to create a vision of the perfect family is going to lead to a society founded on the hatcheries and conditioning centres seen in Aldous Huxley’s Brave New World. 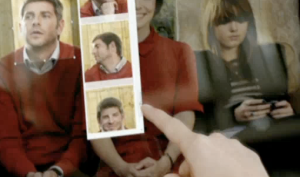 And let’s not bring Davros into it, Doctor Who’s fictional scientist whose obsession with creating a genetically pure master race led him to destroy his own people. I can’t imagine the mum in the Windows advert doing THAT. All she wants is a photo she can share without embarrassment! IMAGINE if her friends saw her children acting like normal children. It’d be terrible.

Still, I work in marketing myself and I don’t have a moral high ground to clamber onto. And families becoming perfect in adverts is hardly a recent aspiration. So all that a sensible person can do is look at the details in the ad.

In both the UK and US versions, the daughter is called Jen. We’re not told whether this is short for Jennifer, Genetic or Eugenics. I suppose it could be any of them. And in the US version the second-named child is called Cody. But only a fool with the wildest of imaginations would take a monologue about “Jen texting, Cody sticking…” and mishear it as something to do with rewriting genetic code.

(In the UK version the second kid is called George, I expect it’s a reference to HG Wells, so we got off lightly. Mind you over here Mum thinks the family look ‘rubbish’ rather than just ‘unruly’. Mind you again, in the US version the family are dressed identically, which quintuples the creepiness factor.)

We can also clearly see next to the computer on Mum’s bookshelf a copy of Jonathan Strange & Mr. Norrell by Susanna Clarke. That’s an interesting novel to choose: one I like very much, and which has spawned an interesting essay about the silencing of unwanted portions of society.

The last thing we have to go on is that in order for Mum to implement her changes, she switches to a new, hidden computer, declaring “To the Cloud!” And as the ability to do a quick bit of photo editing has absolutely nothing to do with cloud computing, I’m just going to have to write the whole thing off as science fiction, stick The Stepford Wives on, and never go near another Microsoft product in my life.