Kanye West and the Diamonds of Doom

Review of Kanye West at the Hammersmith Apollo, 23rd February 2013 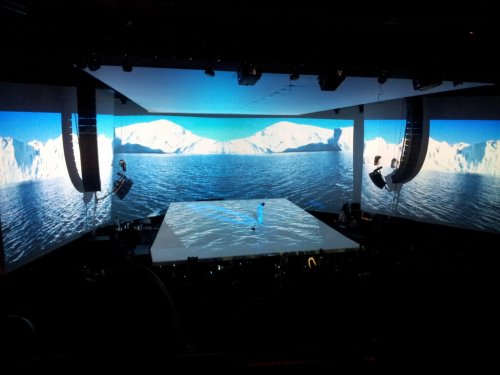 Poor old Kanye. An acclaimed music career that shows no sign of slowing down, a blossoming relationship with a little babby on the way, and so very much money that he can afford to slag off corporate sponsorship now – and yet he’s still so alone and so cold. At least, that’s what we must assume when we see him, a solitary figure in white pacing a vast, bare stage like an aggrieved polar bear while projections of icebergs and blizzards and cold seas play behind him.

It’s beautiful, minimal staging. He was surrounded by writhing, body-painted women the last time I saw him, but today there’s no-one to get in his way as he lopes around his empty square in what could be either a strait-jacket or a mummy’s wrap. Sometimes he covers his face completely, singing from behind a bird mask or, most alarmingly, a sewn-up ski mask completely encrusted in diamonds – the close-ups on the giant screens make him a disturbing, abstract monster. Meanwhile on the backing track Shirley Bassey’s diamond fetish gives way to Rihanna’s and some sort of circle is closed.

Kanye’s own favourite numbers seem to be his robo-despair epics, and he milks Say You Will and Runaway for all they’re worth and more. But the dreamlike atmosphere persists even as he makes his way through the big hits, and the design choices are thrilling throughout. When the all-white-everything section has gone as far as it can go – with an outbreak of snowfall over the stalls while Kanye mopes in an icy forest – the Apollo erupts in sudden, dazzling colour for Flashing Lights and All Of The Lights. It’s a well-timed middle section that offers some relief before the icebergs return to finish him off and Kanye trudges away towards them. Poor old thing.