I saw this poster on the tube on the other day. It couldn’t help but catch my eye. These are the happiest, most excited and fulfilled people I’ve ever seen! My future starts here, you say? I had to go in for a closer inspection.

1. Joy: Those beaming faces say more about the results of education than any prospectus ever could. Strength through learning! And the excellent teeth displayed by all the students tell us that the fees at Anglia Ruskin are not so prohibitive you’d have to forget about cosmetic dentistry for three years.

2. I have in my hand a piece of paper: But what does it say? Perhaps these students share a house and have just used university facilities to print out copies of their cleaning rota.  Perhaps they have been photocopying their arses. Perhaps they are applying to go on Deal Or No Deal. We will quite literally never know. Note however that the paper is held in the right hand for women, and the left hand for men.

3. Dress code: Women may wear any shoes at Anglia Ruskin, but otherwise a strict dress code of blue jeans and a scoop neck top should be observed. It’s not clear whether chinos and a checked shirt are as rigid a uniform for men, as we can only see one guy, but it would make good practical sense.

4. Jan 2013 Starts APPLY NOW: The thing is, when you’re buying media space, they’ll offer you all sorts. A free week here, a month’s run-on for half price there… Before you commit to anything, take a good hard look at your ad and ask yourself if anything on it would look silly if it stayed up for a couple of extra months. There.

5. Leaping: Clearly, the higher the leap the greater the joy. There are various levels of elevation on show here, from tentative to fully airborne. The most enthusiastic is the unseen fifth student – ah yes, had you noticed her*? All we see is a foot on one side of the lead student and an arm on the other, like a botched attempt at B*Witched’s Rollercoaster dance routine. Yet this shadowy figure is the one most stimulated by her degree prospects. Who IS she? (*Yes obviously it’s a woman, as the paper is held in the right hand.)

6. YOUR FUTURE STARTS HERE: It’s great to look at a poster and know that your life has changed with immediate effect. Even if you don’t apply to Anglia Ruskin University, your destiny will now take a different course, subtly or otherwise. We’ve all seen Sliding Doors. And look at me. Last week I could never have imagined myself sat here making things up about an out-of-date university poster. No actually I could.

7. Psalm 16: Intriguing. The makers of the poster couldn’t have known that someone would write “Psalm 16” on it at Upper Holloway, and yet here it is. Authorial intent aside, anyone seeing the poster will, like me, see the addendum too and then find it linked with Anglia Ruskin University in their mind. So what’s the significance of this psalm?

Well it’s a psalm of David, that’s a good start. “Keep me safe my God, for in you I have refuge,” it opens. “You are my Lord, apart from you I have no good thing.” To be honest that puts a bit of a downer on the rest of the poster. Perhaps you’ve got this far down and are already thinking how happy you’ll be starting, say, a foundation degree in Equine Science with Rehabilitation Therapies. Then Psalm 16 comes along and points out that nothing matters except God – it may as well walk into your house and shit in your bath.

“Those who run after other gods will suffer more and more,” it hectors, clearly singling out the students on the poster as they race down that corridor, hellbound. “You make known to me the path of life, you will fill me with joy in your presence” – so we can forget everything we’ve just learned about education being the path to joy. It ends “…with eternal pleasures at your right hand.” And we know what that means – a female student with a cleaning rota.

If popstars were… witches 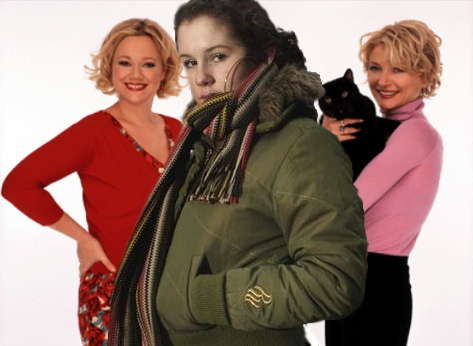 Things are looking up for witchcraft in pop now that Katy B’s thrown her hat into the hexagram. But it’s been a long hard journey to get here.

In 1975 Cliff denounced his own song Honky-Tonk Angel in a Christian fury after someone told him it sounded like he was singing about a prostitute. Fortunately Devil Woman has a much more positive Christian message.

Kindly, tennis-loving Cliff has a terrible run-in with a gypsy lady who leaves him on the floor after slipping him a potion. He keeps on about how evil she is, but assuming that the potion was nothing more than a Babycham on an empty stomach, her only misdeeds are trying to win him “with her feminine ways” and get him “from behind”.

It’s a pretty good capsule summary of the Church’s relationship with witches over the years: Man is scared of own sexuality and of not being in charge, man decides woman is in league with the Devil. In fact the story goes that Cliff only agreed to sing the song after making the lyrics more aggressive towards the ‘devil woman’, and has since regaled fans at concerts with the inspirational tale of how the song saved one woman from turning to the occult. Congratulations, Cliff.

Which witch? I like to imagine Cliff seeing a paperback copy of How To Become A Sensuous Witch on a bookstall and torturing himself with thoughts of the startling lady on the cover. (Image found on this amazing blog.)

Here’s an unsettling song. Kate’s having some sort of time-travelling out-of-body experience and endures a medieval witch trial on a ducking stool. If you’re listening in the context of her Hounds of Love album you’ll gather it’s all going on while she’s trying to stay alive in icy water in the present day.

What does it sound like? Trippy piano and half-heard voices give way to manic chopped up beats, church bells and the terrifying voice of the inquisitor. Scary.

Which witch? Before Kate came along I think this was pop culture’s best-known indictment of witch trials. “What else floats in water?” “Gravy!” Logic at its best.

NATACHA ATLAS — I PUT A SPELL ON YOU

What does it sound like? There are so many covers of this great song. I love Natacha’s best because the clattering percussion and woozy strings in her “hello I’m Arabic you know” version properly capture the mad intensity of falling hard and helplessly for someone. It’s as dizzy and intoxicating as you hope being actually bewitched would be.

Which witch? There’s precious little to learn about the nature and practice of witchcraft here. It’s presented as a means to an end to get people into bed with you. (I really wouldn’t want to have to admit that Cliff was right.) But Natacha is as camp and commanding as Faye Dunaway playing Selena  in the 80s Supergirl film.

The idea of Soft Power dates back to Lao Tzu, who said that what is fluid and yielding will always overcome what’s rigid and inflexible. “Water always wins,” as Doctor Who put it. Ladytron’s lyrics are as impenetrable as you like, but they conflate Soft Power with the Witching Hour of their album title so let’s read it as a celebration of witchery’s subtletly and cleverness.  Call it a set of typically feminine qualities, if you must — I’m aware that I’ve ended up writing exclusively about female witches, after all. My one attempt to include a male witch got no further than the line “Do what u like shall be the whole of the law” (Take That featuring Aleister Crowley).

What does it sound like? Hypnotic and beautiful, with menacing synths turning in an endless chord sequence underneath a gorgeous vocal that hovers delicately between emotion and self-control.

Which witch? So very mysterious, so very reliant on what isn’t said or seen, Ladytron in this song (as interpreted through the medium of dance here) are the Blair Witch.

Finally here’s Katy. If the black goo coming out of the drain behind her head and her psychokinetic frenzy in the video make you think it’s all gone a bit Silent Hill, don’t be alarmed. For all the talk of dusty spellbooks and rosemary potions in the lyrics, Katy’s a very modern witch with a nice Nokia touchscreen and, clearly, some terrific haircare products.

What does it sound like? Like the sweetest amusement arcade you ever visited. I love the alarming drop-down into the middle 8 and its dangerous, random-sounding chord sequence — sorcerous.

Which witch? Never mind that the songs I’ve looked at so far have treated witchcraft as evil, perilous, intense or mysterious. Katy doesn’t care about any of that! She generally sings about having a bit of fun and meeting some boys, and that’s not about to change just because of a sudden onset of occult powers. So I’ve cast her as Sabrina The Teenage Witch and let’s hear no more about it. What we really need to be worrying about is the conjuring that led to this song acquiring an apostrophe between the album release earlier this year and the single this month. Now that’s magic.