Will Muse’s rock career be alright after billions of people around the world have heard their official 2012 Olympics song Survival? I mean, it’s awful, isn’t it. It’s ridiculous. (Yes, it’s both those things but I love it.) Here are some TV pitch ideas for the lads in case they have to step back from music after this.

The concept: Horrific documentary in which the boys investigate body parts left behind by serial killers.

Dom: That’s a nice peroneus longus you’ve got there Chris.

Chris: Yes it’s in very good condition isn’t it. Shame they couldn’t salvage the mucous sheath after this poor fella got flayed.

The concept: Ill-considered revival of the mediocre Michelle Collins vehicle. Nicki and the gang are back from the Med and working on the pier in Muse’s home town of Teignmouth. Matt and the boys play amusement arcade attendants who get into all sort of hilarious scrapes.

Chris: If we don’t find that bag of 5p coins before Brian Conley gets here Nicki’ll have our guts for garters!

Michelle Collins: I heard that! Go and clean out the Penny Falls machine with a toothbrush.

Chris: (muttering) At least no-one’d ever make a shitty tv show out of Penny Falls.

The concept: The boys get their own shopping channel segment selling electric baby substitutes to the lonely and/or barren.

Matt: And THIS one will crucify your enemies!

Matt: (flipping baby roughly over) Aha! I’ve exposed your lies, baby! The underneath is no big surprise! Now it’s time for changing! And cleansing everything!

Time Is Running Out

The concept: Sapphire and Steel spin-off in which the boys chase the physical embodiment of Time through a building and try to stop it “running out”.

Chris: We tried that Matt. It regressed us all to toddlers and made us dig it up again.

Matt: Murder it then. Why don’t we murder it? Or smother it! Or–

Dom: I wish we could take time back to before the Olympics.

The concept: Science exploration show in which the boys join forces with Professor Brian Cox for some fun with astrophysics. 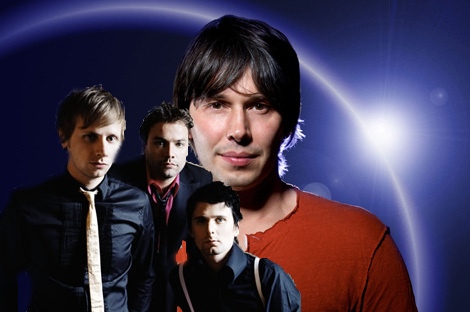 Dom: You got that off Wikipedia.

Professor Brian Cox: Hey you do all realise this song sounds exactly like Do Something by Britney Spears, don’t you.