Gio Compario is an alien supervillain. Since he first appeared in the Go Compare ads two years ago, most people’s reponse to the everpresent campaign is to howl or turn over or mute the telly, wailing about how much they hate the jingle. I suggest we be more vigilant. THE JINGLE IS A FRONT. We’ve all seen plenty of evil masterminds in film and tv over the years, and while we’re distracted by the music we’re overlooking the giveaway powers and attributes that Gio displays… 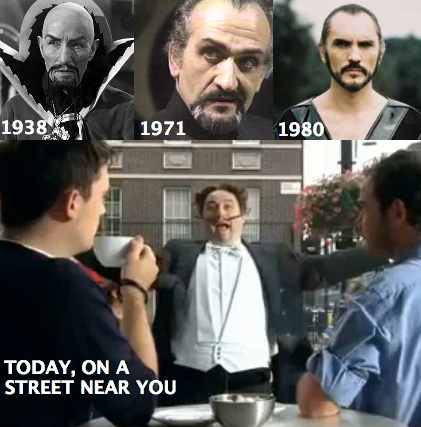 In his very first appearance, bounding into a coffee shop, Compario is mistrusted and ignored. But he demonstrates his powers with a high note that shakes the earth and rattles cups. And look at his appearance – the facial hair and the black, white and grey ensemble. We have seen this sort of thing before.

When we next meet him, his audience are more accepting. And he demonstrates the surprising ability to levitate, rising gracelessly into the air from the sunroof of an affordable car.

In the classic ‘Finishing School’ ad, Gio bursts unexpectedly from an incongruous empty wardrobe, much as though it were his TARDIS.

Compario’s alter-ego is mild-mannered opera singer Wynne Evans, who has just topped the classical charts with his debut album.

To convince two wary businessmen of his good intent, Gio – through some mass hypnotic technique? – compels a restaurantful of the rich and powerful to become just like him…

APPEARS AS A SAVIOUR

Running out of the ocean to greet a lonely desert island castaway, Gio conjures from nowhere some hula girls, a steel band and a Man Friday. The poor Crusoe figure is totally won over. But we see the truth of matters when the parrot backs nervously away from Compario’s approach. Eagle-eyed viewers will remember the earlier clip’s little white barking dog in the driveway. They do say that animals can sense evil.

And having done the groundwork, Gio finally unveils his most potent abilities:

TIME TRAVEL/ TRANSMIGRATION OF SELF

Emerging from a sarcophagus during what appears to be a 1920s archaeological expedition to Egpyt, Gio assists in the disinterment of his “mummy”, essentially a female version of himself. She’s been sat Sutekh-like on a hard throne for, presumably, thousands of years. Different splinters of the same being, scattered throughout time? Or something more sinister? 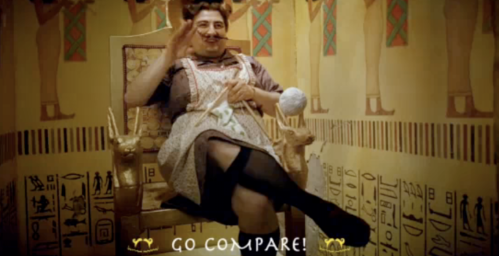 And now, in a future that shows us even retrofuturist rocket captains will need insurance comparison websites, Gio appears as a giant sparkling angel and shows he has the ability, far beyond the levitation he once revealed, to launch himself into powered flight from the surface of an alien world. Breathing in a vacuum and flippant with it.

Readers, if you see this man, beware him. Don’t listen to his song. Don’t visit his website. Call for help. And you’ll thank your stars.

This entry was posted in Adverts explained and tagged adverts, time travel. Bookmark the permalink.