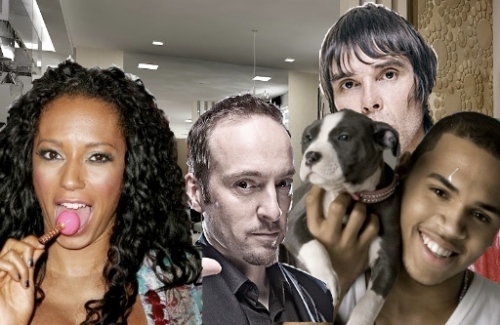 It’s with some trepidation that I approach the impressive maisonette where Derren and Melanie Brown live with their son Chris. Chris has been in the headlines for all the wrong reasons recently, whether relentlessly smashing his girlfriend’s face to a pulp, light-heartedly revealing his elephantine penis to the internet, or flying into a rage on the set of a TV interview and storming angrily off to throw furniture around.

But my fears are allayed when Mel B flings open the door. Dressed in a trademark animal-print bikini & cape, and a broad Northern smile, she cheerfully bellows “Come on in, he won’t bite!” in that accent of hers.

The reasons for this become clear as I’m ushered into the kitchen-cum-TV-room. Chris has quite literally been muzzled and is bound to a chair with gaffer tape. “It’s for his own good really,'” laughs Mel, offering me a Ryvita Mini. “To be honest we’re thinking of having him put down!”

Mel’s husband Derren, a reclusive mastermind and sometime lord of illusion, emerges from the shadows. “I knew she was going to say that,” he says, prestidigitatively.

“Come on, our Chris!” shouts Mel. “Time for your mango!” She dribbles some juice into the corner of his muzzle with a pipette, while his eyes blaze murderously with fury. “He’s a terrible disappointment really,” she confides. “I were only a teenager myself when I had him. But to be honest if I hadn’t, I reckon our Derren would have been off on the other bus by now!”

“It… was… a thought experiment,” says Derren tightly, engaged in some business with a smashed watch and a locked box. Looking up at me, he asks “Oh, would you get the door?”

“What?” I ask, and just then the doorbell rings. A dour figure is stood there in kagoule and sunglasses – it’s Derren’s older brother Ian.

“ALRIGHT OUR KID?” he enquires, barging in. “I’VE COME FOR ME NEPHEW.”

“COME OFF IT OUR MEL,” chides Ian. “I’M GETTING THE OLD BAND BACK TOGETHER. BUT WE NEED A BIT OF YOUTH. A BIT OF SPUNK!”

Mel races over. “I’ll give you a bit of spunk,” she yells, which unfortunately

This entry was posted in Celebrity families and tagged chris brown, derren brown, ian brown, mel b. Bookmark the permalink.