What happened in 1982 on the fantasy island

For “1982 Week” our teacher told us to visit the oldest person we know and ask them what they were doing in 1982. I went to visit my nan in her flat, she is quite ill and tired now and she cannot move around very well but once she was very pretty and she had fun like we do today. 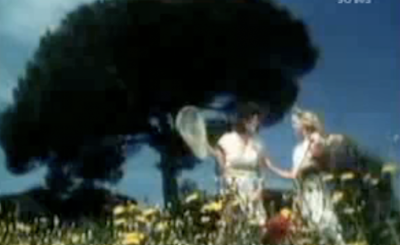 In 1982 my nan went on a holiday with her sister to an island. It was an island surrounded by sea and she said it was like a fantasy island. She showed me some of the photographs from her Kodak Brownie and in a lot of the pictures there was a man.

“When me and your Aunty first saw him we just threw all in the flowers we’d been collecting into the air,” said Nan. “Because he was the most beautiful thing we had ever seen. Just me and him would go walking together – watching the sunrise over the trees. It all seemed like magic.”

“Just you and him and Aunty Linda as well though?” I asked, because Aunty Linda was in all the pictures with the man too. My nan does not speak to Aunty Linda very much and they had a big fight at Christmas once. She did not really answer my question but she said that on that holiday she had a dream of love never leaving, but the man had said that love cannot really live in a dream.

“When you are young you think that true love will hold you both together and you can stay like that forever,” said Nan. She looked at the next picture, of her and the man and Aunty Linda outside a nice cave. “But sometimes it doesn’t even last for a week.”

On the last night of the holiday they all got dressed up for a special night. “If that night had gone differently you would not be here today Bert,” said Nan. I looked at her and she was a bit red around her eyes so I think it must have been time for her medicine.  I do not know what she meant and I do not see how my life could have happened because of a holiday in 1982. But one day I would like to see the fantasy island for myself.