I Need a Doctor: The surgery is open

Doctor Doctor, I’m about to lose my mind and I need a doctor to bring me back to life

After producing some of the best loved music of all time, Dr. Dre’s spent the last ten years fannying around, often announcing that a new album’s on the way, sometimes even setting a release date. And it’s become a running joke that this supposed new material never materialises.

Prescription: Fortunately in the intervening decade, the ‘extended filmic introduction’ has become increasingly acceptable and popular in pop videos. So all Dre has to do is start his big comeback video with an exciting scene of him having a car crash in ‘2001’, and then simply, er, pretend that he’s been in a coma the whole time.

Doctor Doctor, I’m worried people won’t like me any more

When you’ve been away for a long time it’s important to pitch your comeback right. Most stars opt for the immediate LOOK IT’S ME I’M HERE! approach, but Dre obviously feels his return is so important that it needs special treatment.

So in I Need A Doctor he lets the first three quarters of the song go by before he appears in it. He hasn’t even produced it! Which is terribly ironic when you consider that it’s his production rather than his rapping that people have been itching to hear again. (Alex da Kid’s production is great by the way, he’s produced one or two of my favourite tracks recently. And though he does seem to be using basically the same trick over and over again, it’s a good one that hasn’t gone stale yet, so bring it on.)

Prescription: To build anticipation for the big man’s return, we get two verses of Eminem, chestbeating about how he can’t go on without his mentor anymore, and two choruses of ‘I need a Doctor!’ belted out by Skylar Grey. In the video she’s floating above Dre’s inert body as an angel! Except that despite lending her voice to a couple of big songs already, no-one knows what she looks like yet, so they get in a synchronised swimmer ranked Number 61 in FHM’s “100 Sexiest Women in the World 2005” to ethereally flap about and mime her lines instead.

Basically it’s a picture of how awful the world is without Dre, so that we properly appreciate it when he finally opens his mouth. A Buffy Season 6 sort of a comeback, if you will.

Doctor, Doctor, I’m worried I might be developing homosexual feelings for a close male friend 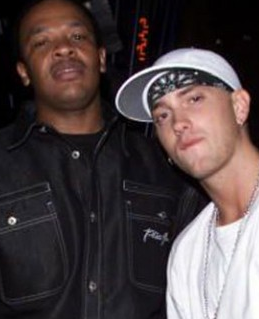 The passion that Dre and Eminem show for each other in this song is quite moving. “You gon’ either wanna fight me when I get off this fucking mic, or you gon’ hug me,” says Slim vigorously. “Get up Dre, I’m dying, I need you, come back for fuck’s sake!”

And Dre, upon waking, shows his love with perhaps the gayest couplet we’ve ever heard from such a macho artist. “All I see is Slim… All I need is him!” he declares extraordinarily, and, shortly afterwards, “Kiss my indecisive ass crack!”

Prescription: To put straight any such doubt or speculation, Dre throws in a pointless admonishment to us “Faggots!”  in between those two lines. Well that’s shut me up.

Doctor Doctor, I’ve got a great big hook stuck in my head

Yes, that is a big hook, isn’t it. So potent and massive, in fact, that if we don’t end up hearing it prominently within minutes of the new series of Doctor Who Confidential starting in April, you can send in a stamped self-addressed envelope and I’ll post you my knees and elbows.

Prescription: I’m afraid it’s not possible to remove the hook without damaging the memory centres of your brain. You’re just going to have to listen to it over and over again.