Square dancing: More than words can ever say

They don’t give a credit to the person who decides on the diegetic background music for scenes in EastEnders. Does the writer get to choose it? Does the director get a say? Is it a job for a researcher? It is clearly the best job in the world. 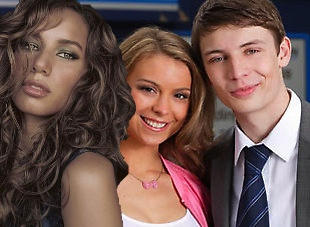 Why the long face, Leona?

More often than not, the choices of song are a sly comment on the situation they’re soundtracking. I love spotting these when they’re subtle. TONIGHT IT WAS NOT SO SUBTLE as three songs blared out in sequential cross-cut scenes. I like that too.

Dusty Springfield: The Look Of Love: Alfie is upstairs at the Vic, preparing a romantic setting to reignite passions with his wife Kat. An obvious choice, yes, but then again if you can’t get romantic to this song then there’s probably something wrong with you. “Saying so much more than words can ever say…”

Rachel Stevens: So Good: Well you don’t hear THAT on the telly very often. And here it is on the jukebox in the Vic while Kat gets her lairy post-grief shimmy on, ignorant of hubby’s efforts upstairs. “I’ll get back on my feet again,
I know I’m gonna feel so good!”

Leona Lewis: Bleeding Love: Poor lovestruck Abi is ALSO strewing a room with red cushions, in an attempt to seduce long-time crush Darren during his brief break from Jodie “I have sensitive eyelashes – like a camel!” Gold. Leona’s song plays, pretty much in full, as a humiliating letdown ensues in a deliciously cruel scene that ends with an excellent gawp. “My heart’s crippled by the vein that I keep on closing.” Textbook.